Documents also show that in 2013, Gillum and the Tallahassee City Commission declined to approve a Tallahassee Police Department request for five new police officer positions in fiscal year 2014 to address the crime problem.

However, another even more troubling result during this period was the dramatic and consistent increase in the murder rate in Tallahassee, which occurred not long after the Tallahassee Police Department made the Tallahassee City Commission aware of a problem.

The chart below compares the 3-year moving average of murder rates in the state of Florida and the City of Tallahassee from 2002 to 2017. The graphic representation shows the dramatic change in murder rates that began in 2009. This was the same year when law enforcement officials began to sound the alarm.

The Tallahassee murder rate began climbing in 2009 and surpassed the slightly declining murder rate of the state of Florida in 2011. 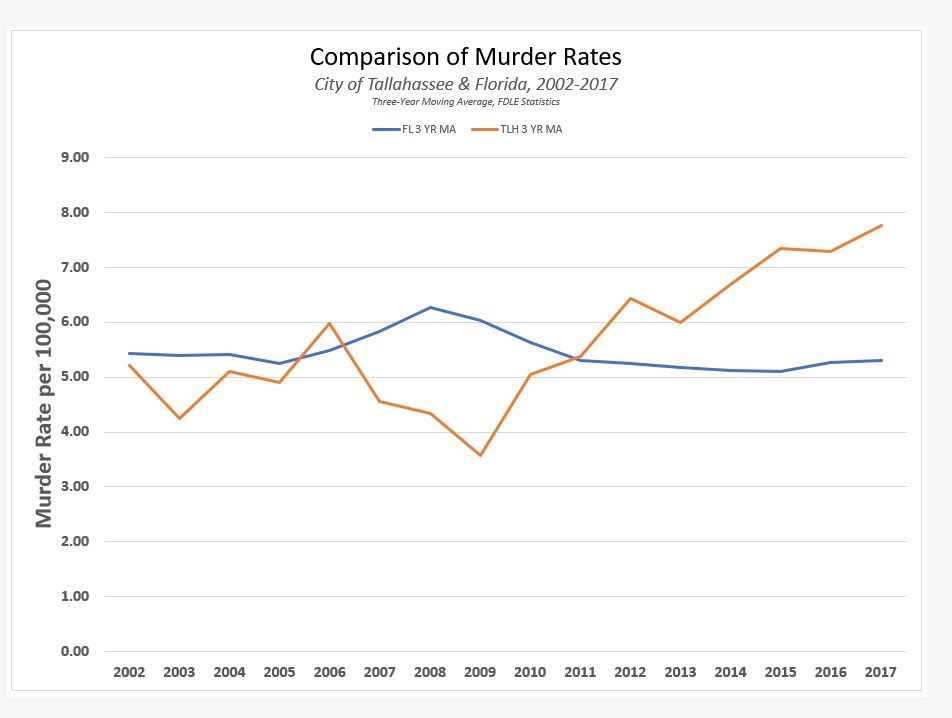 The city’s annual budget documents show that Andrew Gillum and the Tallahassee City Commission were given warnings about crime problems from 2009 to 2013.

During the 2010 budget cycle, police officials informed upper management and the city commission that staffing was an issue.

The report referenced above and completed in the early 2000’s by the Police Executive Research Forum (PERF), concluded that the department was approximately fifty patrol officers understaffed to meet a 50% goal of proactive time for patrol officers.

After the study, between 2003 and 2008, the City added 13 officers, but since 2008 the number of sworn positions has actually declined.

During the 2011 budget cycle, the police department reported that:

During the 2012 budget cycle, the police department informed upper management that:

During the 2013 budget cycle, the police department reported that:

During the 2014 budget cycle, the police department asked for more police officers. The request stated:

The Tallahassee City Commission failed to approve the request for the five police officer positions. Source 2014B.