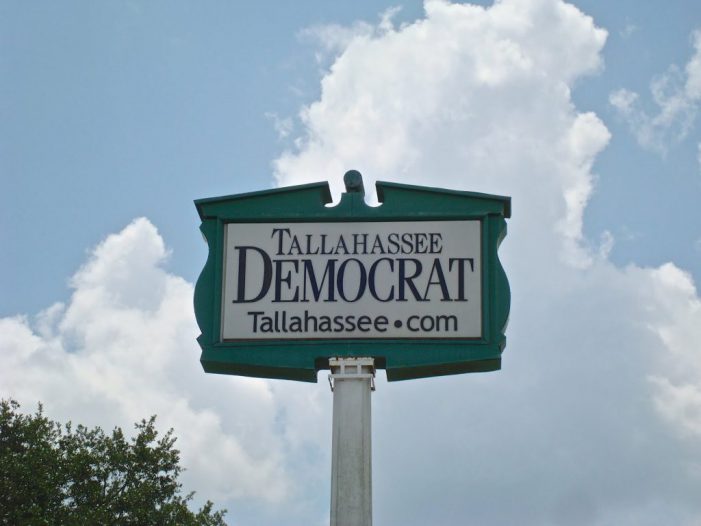 After the US Attorney issued a statement saying the investigation into the Leon School Board and Jackie Pons had ended without charges, Pons talked to Tallahassee Democrat reporter Jeff Burlew.

Burlew asked Pons what his next steps were with regards to the infamous notebook.

Pons said he wants to get the truth out.

“Does that mean a lawsuit?” asked Burlew.

“We’re keeping all of our options open on everything,” Pons said. “There’s a lot of interest in this now that people are realizing that this stuff is not true. Obviously, there’s some responsibility.”

Ironically, one of the possible targets in a lawsuit would be the Tallahassee Democrat.

Two of the wilder accusations that have originated from the local reporting surrounding the Leon County School District over the last four years includes a $30,000 boat the district supposedly paid for and a Jackie Pons DUI.

A Boat Purchase and a DUI

Like most rumors, it is hard to tell exactly where they get started.

On June 18, 2014 Tallahassee Democrat Reporter Jeff Burlew submitted a public records request to the Leon County School Board that asked for “copies of any emails, memos, receipts, purchase orders and any and all other documentation involving the purchase of a boat by the school district.”

On June 19, 2014,  at 8:30 AM the Tallahassee Democrat published an article that reported accusations made in a lawsuit against the Leon County School Board and Superintendent Jackie Pons.

The following section was published in the Democrat:

The lawsuit says Nichols also was asked about whether she knew anything about a boat or beach house or rumors of a DUI crash involving Pons and a district vehicle. Nichols responded by saying she’d heard about a purchase by the district of a boat for $30,000 but that it wasn’t properly authorized. She also said her daughter’s best friend worked at a body shop where Pons had taken a district vehicle and that he’d paid for the repairs out of his own pocket to avoid an invoice to the district.

Through public record requests, Tallahassee Reports has learned that Tallahassee Democrat reporter Jeff Burlew had in his possession, on June 19 at 4:56 pm,  information that did not substantiate accusations about a boat purchase in the article made against Leon County School Superintendent Jackie Pons.

The information provided by the school district is provided in an email below. Click image to enlarge. 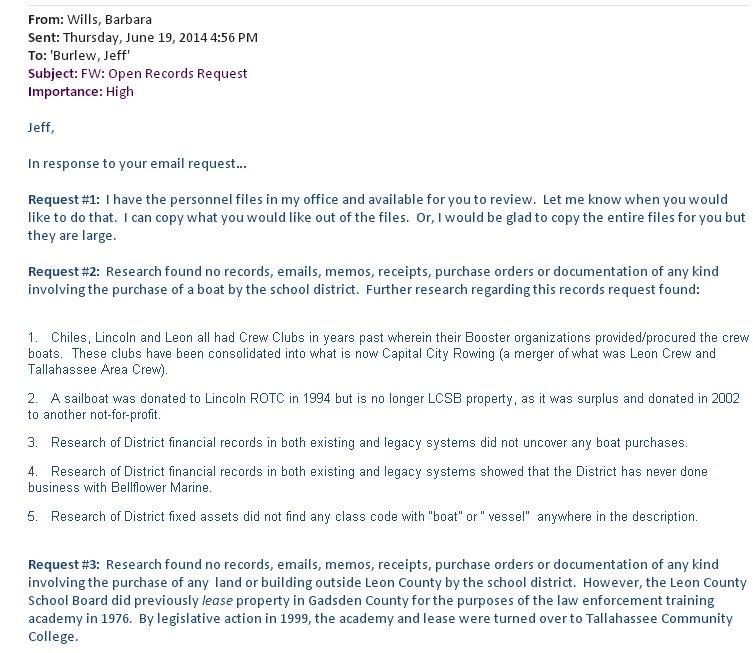 The information in the above email clearly shows the accusation about the boat purchase was not supported by any public documents.

However, for whatever reason, Mr. Burlew did not wait for the information from the School Board before publishing the accusation about the boat.

In fact, Mr. Burlew has yet to publish the findings provided in the above public records request.

In addition, the accusation that Pons had a DUI in a School District vehicle could have been easily verified by checking with local law enforcement officials.

Was it Mr. Burlew’s responsibility to provide the information?

Was it the responsibility of the Tallahassee Democrat to ensure fairness and address omissions of facts?

The American Society of News Editors states that:

Every effort must be made to assure that the news content is accurate, free from bias and in context, and that all sides are presented fairly. Editorials, analytical articles and commentary should be held to the same standards of accuracy with respect to facts as news reports. Significant errors of fact, as well as errors of omission, should be corrected promptly and prominently.

Sources close to Pons tell TR he will make a decision about possible legal action in the coming months.

Check back for updates to this report.