By Andy Durham Tallahassee, FL — Chiles High Lacrosse pulled away from crosstown rival Lincoln High on Tuesday night for an 8-4 victory at Gene Cox Stadium. Rain came and went throughout the game, and referees ended up calling the game with five minutes left in the fourth quarter due to an extended lightning delay. […]

On New Year’s Eve Florida State will take on the Arizona State Sun Devils in the Sun Bowl in El Paso, Texas. The game will be televised on CBS at 2 PM Eastern. The Sun Devils had a very streaky season winning 5 out of its first 6 games, followed by a 4 game losing […]

How Does James Blackman Measure Up? 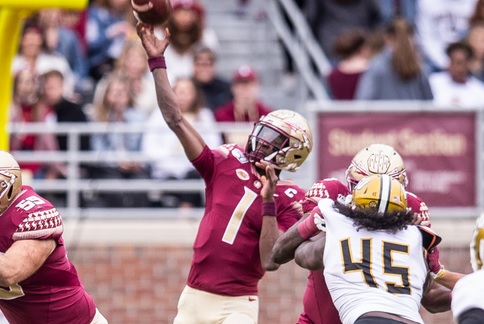 Florida State quarterback, James Blackman, is coming off two of his best performances this season.  Since reclaiming the starting job from Alex Hornibrook, Blackman has been playing lights out football throwing for a combined 5 touchdowns and 1 interception against Boston College and Alabama State. While he is certainly riding on a pair of robust […]

On Saturday the Seminoles will be in Gainesville to take on the Florida Gators at 7:30 PM on SEC Network. Florida is 9-2 on the season with wins against Miami, UT-Martin, Kentucky, Tennessee, Towson, Auburn, South Carolina, Vanderbilt and Missouri with losses to LSU and Georgia. The last time FSU was in the Swamp the […]