“Not Our Governor” Billboards in Tallahassee Financed by Anti-Police Group 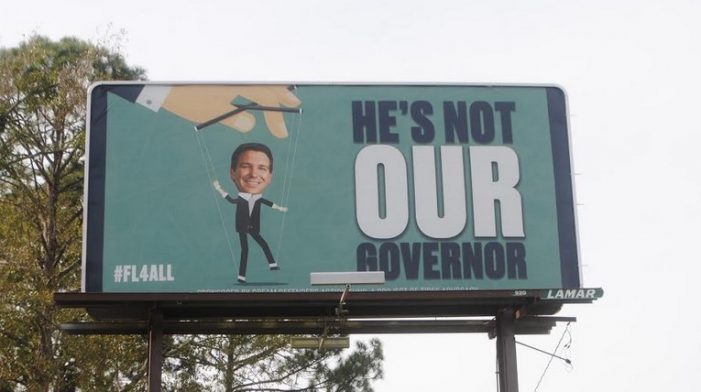 The Dream Defenders, a group that endorsed former Tallahassee Mayor Andrew Gillum for governor of Florida, is responsible for putting up billboards in Tallahassee entitled, “He’s Not Our Governor.”

The billboards were unveiled around the time Republican Ron DeSantis was sworn in as Florida’s governor.

When Tallahassee Reports asked for the motive behind the billboards, a Dream Defender spokesperson said:

“Between running as a Trump lackey, his connections to the private prison industry (and a slew of other corporations), and his record on healthcare, we wanted to drop a reminder to people in Tallahassee and in Florida that DeSantis is not beholden to us. He is beholden to these big corporations that do Floridians harm and stand in the way of everyday people’s health and to a President who shut down the government for a wall his friends would get contracts to build.”

The billboards depict Governor DeSantis as a puppet attached to an orange hand.

“Not Our Governor” Billboards in Tallahassee Financed by Anti-Police Group added by Staff on January 31, 2019
View all posts by Staff →