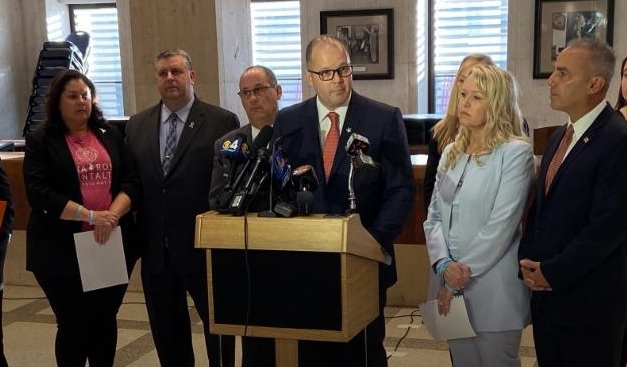 By Dara Kam, The News Service of Florida

TALLAHASSEE — Suspended Broward County Sheriff Scott Israel faced a legislative showdown Monday in the fight to get his job back, amid procedural wrangling that began before senators even began considering his fate.

The Senate formally opened a special session Monday morning on Israel’s appeal of his suspension, with the Senate Rules Committee then slated to meet the rest of the day. The committee meeting was expected to include testimony from family members of victims in last year’s mass shooting at Marjory Stoneman Douglas High School in Parkland. Also, supporters of the suspended sheriff were at the Capitol.

Gov. Ron DeSantis made Israel’s ouster one of his first acts after taking office in January, accusing the Democrat of “incompetence” and “neglect of duty” for deaths resulting from mass shootings at Marjory Stoneman Douglas High School and at Fort Lauderdale-Hollywood International Airport in 2017.

Thirty minutes before the Senate special session began, family members of the Parkland victims held a news conference on the fourth floor of the Capitol, near the Senate chamber, and pleaded with lawmakers to keep Israel out of office.

Tony Montalto, whose daughter, Gina, was among the 14 students slain at the school, said the families are “unanimous” in their desire to see DeSantis’ suspension upheld. Three faculty members also were killed in the February 2018 shooting.

Montalto and the families pointed the finger at Israel for failing to follow proper procedures before, during and after the mass shooting.

The “systemic failures can only be blamed on incompetent leadership,” Montalto said. He called it “unfathomable” that Israel is seeking to be reinstated to his old job.

“Our 17 families have learned that without safety and security, nothing else matters,” Montalto said, adding that Israel and his deputies “failed us when we needed them the most.”

The Senate is considering the recommendations of Special Master Dudley Goodlette, a former Republican legislator appointed by Senate President Bill Galvano to preside over Israel’s appeal of the suspension.

In a blow to DeSantis last month, Goodlette found the Republican governor failed to make the case for Israel’s suspension and recommended the Senate reinstate the longtime law-enforcement officer.

Galvano said Monday after the brief opening to the session that he expects senators to vote their “conscience,” despite knowing that DeSantis wants Israel removed — and has power to veto senators’ bills and budget items during the upcoming legislative session.

“I have faith in the senators that they are going to rise to the occasion, look at everything and adhere to the standard, which is what in their conscience is best for the people of Florida,” Galvano told reporters.

The Rules Committee was poised Monday to begin hearing from lawyers representing Israel and DeSantis, as well as from members of the public. After the committee considers the suspension, the full Senate is expected Wednesday to vote on whether to reinstate or remove Israel.

In the days leading up to the special session, DeSantis’ lawyers submitted an affidavit from Danielle Terrell, executive director of the Commission for Florida Law Enforcement Accreditation, who said the commission did not re-accredit the Broward Sheriff’s Office about a week after the end of Israel’s hearing before the special master. According to the affidavit, the commission’s decision was based on how the Broward agency responded to the mass shootings when Israel was at the helm.

But Benedict Kuehne, Israel’s lawyer, vigorously objected to the submission of the affidavit, arguing in a Friday letter to Senate Special Counsel Christie Letarte that allowing new evidence to be submitted after the hearing was complete “is unfair and not in conformance with due process consideration.”

The presentation is unauthorized by Senate rules and procedures, Kuehne wrote, and Israel “has no meaningful opportunity to address and confront” the information about a proceeding in which neither the suspended sheriff nor his lawyer were invited to or allowed to participate.

“The affidavit is plainly unreliable hearsay,” Kuehne wrote in a four–page letter.

“The alteration of the rules and procedures represents an unreasonable and unfair change in the process that deprives him (Israel) of a meaningful opportunity to contest a suspension that he has demonstrated is unsupported by the evidence and the law,” the letter added.

Kuehne asked that the Senate and the Rules Committee “conduct a careful and meaningful review” of Goodlette’s report “without consideration of any additional information” to which Israel objects.

But Letarte, the Senate special counsel, responded in a memo that the Senate is not barred from considering the information.

“No statute or rule prohibits senators from considering additional information provided to them after the special master’s hearing has concluded,” Letarte wrote Sunday. “To the contrary, (a section of state law) allows the Senate to conduct an independent investigation, and the Constitution requires the Senate, not the special master, to make the final decision.”

Some Democratic senators expressed frustration Monday morning that they were given information late Friday. Sen. Oscar Braynon, D-Miami Gardens, said it was “unfair” and “hypocritical” to give senators last-minute information ahead of the hearing.

“They owe the courtesy to the process to not give last-minute stuff,” Braynon said. “If we are going on the front end to make sure that we act as though we are a jury and judges … then on the back end we should do the exact same thing. I think it is only fair.”

Kuehne wrote that he and Levesque “consulted with one another” during the pendency of the Jackson proceedings, and Kuehne “shared confidential information and strategy considerations” with Levesque, “with the expectation and understanding that our discussions between lawyers similarly situated were confidential.”

Levesque’s appearance as counsel for DeSantis “now compromises Sheriff Israel’s ability to fairly present his case” to the Senate and “affords the governor an impermissible and prejudicial insight to Sheriff Israel’s strategy in the suspension review proceedings,” Kuehne wrote, asking the Senate to “disallow the governor’s use of new counsel.”

But Letarte wrote Sunday that the “Senate has no authority to disqualify Mr. Levesque. Counsel’s objection to the governor’s choice of counsel is a matter for The Florida Bar, not the Florida Senate.”

One Response to "Special Sesssion Starts on Suspended Sheriff"