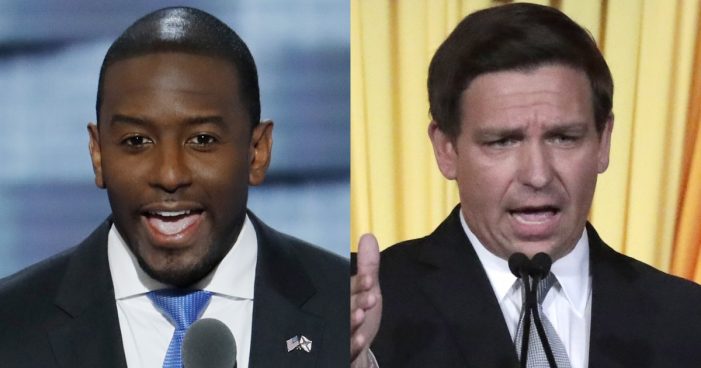 Based on comments by Dr. Erwin Jackson after meeting with officials in the Governor’s Office on Monday, it appears the delay in processing ethics cases has more to do with procedure than the individuals involved.

Jackson stated he was told that the “governor wants to change the current procedures. He believes once a politician is found guilty the process is over. The governor feels the “ethics judges” are best equipped to make a final decision. He also believes that any political influence should be avoided! They plan to seek these changes in this session.”

Jackson said he “was assured the delay had to do with changing the process and not because of the individuals involved.”

The Tallahassee Democrat is reporting that a backlog of nearly 30 recommended orders from the state’s ethics board, which imposes penalties on an array of public officials, is going unaddressed by Gov. Ron DeSantis.

When contacted by TR, Dr. Erwin Jackson, who filed the complaints against Gillum and Fernandez, said he was shocked that DeSantis did not finish the process.

“It is amazing what you have to go through to hold elected officials accountable. I will be at the Governor’s Office on Monday morning to find out what is going on,” said Jackson.

In early 2019 Fernandez acknowledged violations of various ethics statutes related to a $4,700 discount on the catering price for his daughters wedding reception and the use of FSU sky box tickets for four different home games in 2016.

The settlement recommends a public censure and reprimand and a civil penalty totaling $6,000.

Amid the controversy, Fernandez resigned from his city manager position with the City of Tallahassee on January 3, 2018 and, as part of the separation agreement, received $94,000, or 18 weeks of pay.

Gillum and Fernandez have not paid the fines because it is up to the governor to accept the orders created by the Florida Commission on Ethics and have them carried out. DeSantis has failed to accept the findings and no one in the Governor’s Office is commenting.

Ben Wilcox, research director for Integrity Florida – a nonprofit, nonpartisan government ethics watchdog, told the Tallahassee Democrat that it is a “huge concern because (the commission) is struggling to enforce the state’s ethics laws.”