Average Age of Coronavirus Deaths in Florida is 79 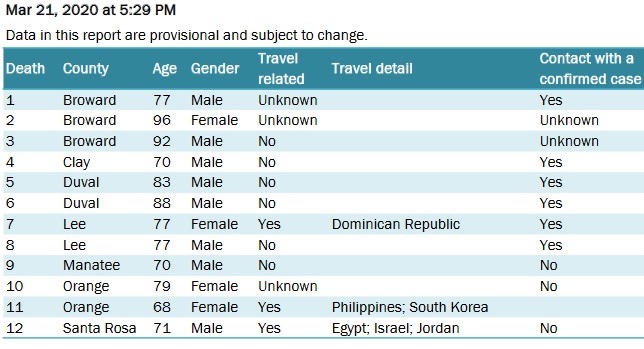 A chart is provided below.

The average age of those who have died is 79. A recent CDC report indicated that eighty percent of US deaths have been among people 65 and older.

The youngest to die was 68 years-old and the oldest was 96 years-old.

Of the twelve deaths, 8 were men and 4 were women.

Three of the deaths were related to travel and six had contact with a confirmed case.

Source: The Florida Department of Health
Note: The death of a person in Leon County, after being transferred from Georgia, has been removed from Florida numbers. It appears the death is being counted in Georgia.