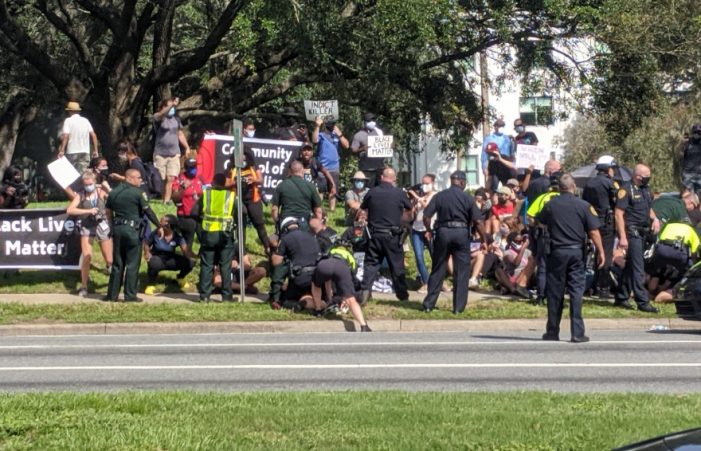 The protest, which was not permitted, took place after grand jury verdicts were released for three officer-involved shootings in which none of the officers were charged.

Revell said that law enforcement had met with the group that was protesting the day of the demonstration and explained the rules, which include staying out of the street. He said the protestors initially complied.

“The problems began when the cars did not obey the rules like we had asked them,” Revell said. “They were clearly impeding traffic.”

“I did do a good show of force, because I’m not going to have my officers attacked and neither are any of these other law enforcement leaders that are with us here tonight,” he said. “That is not acceptable.”

State Attorney Jack Campbell confirmed that there is a possibility that charges against some of the protestors who were arrested could be dropped.

Revell, Campbell and Leon County Sheriff Walt McNeil emphasized that law enforcement had a large presence at the demonstration because they were attempting to avoid a clash between Black Lives Matter protestors and people coming from a Trump rally.

“If that Trump rally had come, and every one of those cars had carried a lawful gun in their car, which by state law they could have done, we could have had a terrible, terrible tragedy if we’d had a convergence of a large armed population at the intersection of Monroe Street and Apalachee Parkway,” Campbell said.

During the meeting, Mayor John Dailey also asked for a vote of confidence in Revell, who has faced calls to resign from protestors and community leaders. McNeil, Campbell, Florida Department of Law Enforcement Director Mark Glass and Florida State University Police Chief Terri Brown all voiced their support for Revell.

The commissioners also passed a motion to bring back an agenda item considering an audit of TPD’s use of force policy at the next meeting.