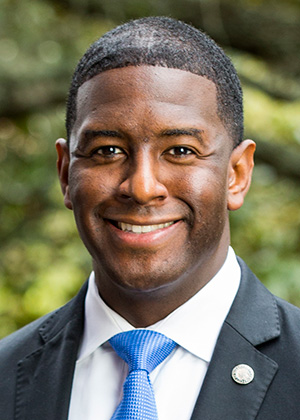 As if we do not have enough pubic relations problems here in Tallahassee, Mayor Andrew Gillum, while in Tampa, took an opportunity to paint Tallahassee as the home to a lot of “big old confederate flags” in his pursuit of votes for higher office.

According to a report by FloridaPolitics.com reporter Mitch Perry, Mayor Andrew Gillum, while addressing students during an appearance at the University of Tampa campus last week, Gillum said:

[T]here isn’t a day that doesn’t go by in my city where I’m not driving behind a truck on my way to work that has a big old Confederate flag.

Think about this! Gillum is saying everyday when he gets in his car to leave his $500,000 home in the Killearn area, he gets behind a truck with a big old confederate flag.

I don’t think so.

Gillum goes on to say that “I know a lot of folks say you shouldn’t conflate the Confederacy with racism. Well, I don’t know another way to describe it. States’ rights? States’ rights to own slaves?”

Gillum’s statements were made in an effort to, first gain sympathy from potential voters, and then to follow-up with examples of how he was a bold leader on race issues.

In the process, he lied about Tallahassee.

You would think the Mayor of Tallahassee would be out promoting the positives of a his community, not misleading people with false statements.

However, Mayor Gillum and his office have had a problem with the truth since he became a candidate for governor.

Remember when he said his campaign had over 7,000 contributors. Politi-fact ruled the statement mostly false.

Remember when he said he never used city email for political purposes? He did.

Gillum’s most recent falsehoods hit closer to home and shows just how far he will go for votes.

Mayor Andrew Gillum owes the people of Tallahassee an apology.

And now on to a bigger question.

Which elected leader will hold Gillum accountable for his statements?